Other Peoples' Lives: The Sundurbans 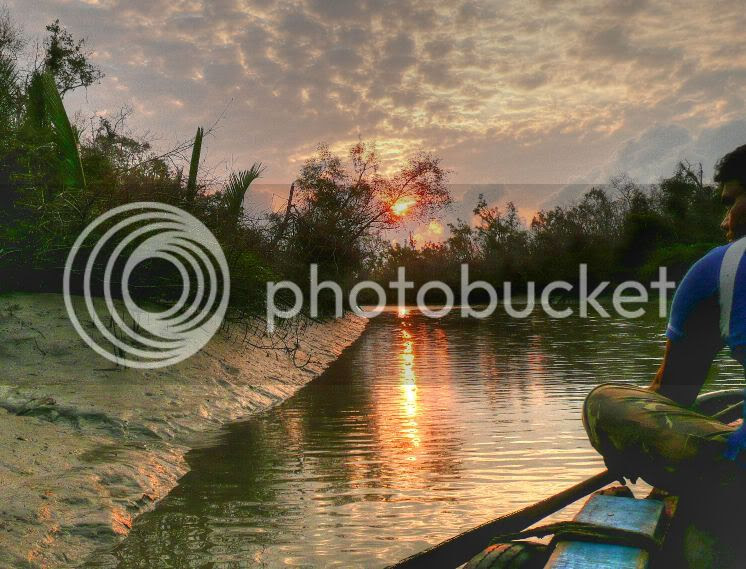 "From time to time, we passed solitary women trudging through the water near the shoreline, pulling nets behind them as they trawled for prawn seed. This practice, introduced in the past twenty years or so, has disastrously reduced prawn and other fish populations, and the constant pacing along the fragile shore by the women and children who drag the nets has contributed to erosion. In their flowing saris, the women presented picturesque silhouettes that belied the danger of their work, up to ten hours a day waist high in the murky water. As many as ten fatal crocodile attacks are documented each year, and, I was told, too many shark attacks to report. The most common are by dog sharks, which take a bite of soft tissue—a leg or buttock—but do not kill. 'They are considered minor hazards,' Dr. Sanyal said, with a sympathetic grimace. The Sundarbans's occupational hazards—crocodiles, sharks, cobras, kraits, swimming tigers, and cyclones—make it one of the most dangerous places in the world."

I find it impossible to put myself in the position of the Sundurbans, in the same way that I cannot imagine going to fighting in the first world war, or with a sword in the middle ages.

It may seem a strange observation, but I think hardly any of us who live in the North America or Europe, would do anything than go into some form of deep shock should we be presented wiht a sword and told to get stuck in. So, we might imagine that we would step up, but I would bet we physically and mentally could not do so.

So, I think its too easy to labour under the impression not just that we could survive in an environment like the Sundurbans (not just for a day or two, and not as a tourist), but that we might come to get an accurate picture of what it takes to do so.

Clearly that belief does not mean it makes no sense to try and understand what we might...

Peter:
I appreciate your point, but am not convinced. Generally, I'd like to agree with you; I do feel that "nurturing" (as opposed to "naturing" ;)) and acculturation shape us in profound ways. But are these forms hard and fast?

Accounts of war journalists like Chris Hedges suggest that the human mind and, indeed, body, is adaptable to extreme circumstances. Shock - biological shock, that is - makes that adaptation more easy, by draining us of the questioning whilst in the moment. The awful downside, of course, is PTSD (posttraumatic stress disorder), the relentless moral hand-wringing and chemical imbalance that surfaces after the fact.

War is one (very difficult, very bad) thing; distant lives and customs are another. I have the impression, perhaps wrong, that these can be adapted to with relative ease, over time. The tourist's horror at the prawn trolling woman is, in two years, replaced by a wave and smile. Five years in, if this one-time tourist is a woman, she may be trolling herself.

I would class war journalists as quite unlike the 'average joe'. They are massively motivated, do-whatever-it-takes types.

Their decision to report war scenes are based on exposure to other difficult circumstances, and I believe most of them try to get as much of any relevant training soldiers get, which may help them deal with the situation.

And then they do not actually participate in the fighting itself.

And the realizations that follow from adaption are not accessible unless preceded by the experience.

All of which is why I feel that I can read, and picture the situation without being able to convince myself that I see it for what it really is.

Peter:
Thanks for the follow-up. It clarifies your point for me. I agree; it's near impossible or impossible to "see it for what it really is" unless you're "stuck in."